Rising Government Debt – Where do we go from here?

Home Our Blog Rising Government Debt – Where do we go from here?
Share this page

Unlike the Global Financial Crisis of 2008, the dot.com bubble of the early 2000’s or even the Asian Debt Crisis of 1997, the economic fallout derived from the required Covid-19 lockdown is more similar to what is experienced in the aftermath of a natural disaster rather than in a typical recession. On this basis, the path to recovery should be faster.

To survive and grow, policy makers have moved quickly and decisively to achieve three things:

Governments around the world are committing enormous sums. At the last count, $11 trillion in various stimulus packages and rising still. Already the amount is $3 trillion higher than the International Monetary Fund (IMF) anticipated back in April 2020.

Each injection of money is split broadly equally between additional government spending, foregone tax revenues and liquidity support; such as loans and guarantees to support business cashflow. Financial markets are already anticipating recovery, but the bottom line is we will have more debt in the system. In fact, much more debt. To give context to the scale of the debt we can compare the amount to the value of goods and services, commonly referred to as Gross Domestic Product (GDP).

Back in 2010 the World Bank conducted a study suggesting GDP should not exceed 77%, due to the diminishing effects on economic growth. Understandable if tax revenues are gobbled up by the need to service interest on debt rather than investment in the economy, productivity will fall. Consequently, highly indebted economies end up losing ground to less indebted ones who have more scope to reinvest in infrastructure and productive capacity. However, the world has changed since 2010. The cost of financing has fallen substantially thus the 77% threshold level may not be as relevant today. The level is now more contingent on the ability to drive growth and so we examine the growth possibilities below.

This week the IMF projected global GDP would fall 4.9% in 2020, but bounce back, growing 5.4% in 2021. The predicted recovery has however been revised down from April where they anticipated growth of 5.8% next year. The downward revision reflects the potential negative scarring on supply chains being more impactful than initially expected. The IMF also worry that demand will take longer to recover, even as restrictions are eased. However, before losing heart it is worth noting that first, the IMF have a poor record forecasting recession and second they are not even good at forecasting the pace of recoveries either. This is because forecasting is difficult to get right.

Let’s stick with some facts. The table below demonstrates that even before the COVID crisis, debt to GDP ratios were flirting above the 77% level. Projections now show debt ballooning to over 100% in the next few years. How worried should we be?

Well to answer that we need to be aware that government debt levels exceeding GDP are not new. The US has managed a ratio over 100% for the last 8 years and Japan have been running with debt levels over 200% since 2009, as chart 1.0 demonstrates. There is undoubtedly a psychological element to the 100% limit being breached, hence the attention received from IMF reports last week forecasting UK debt to GDP will move above 100% for the first time since 1963. 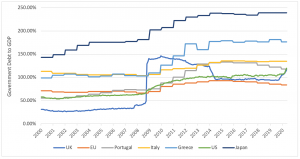 A ratio that tips above 100% doesn’t mean an economy is about to default. What really matters is an ability to continue to issue government bonds, and to ensure serviceability is sustainable on the outstanding stock of debt i.e. remaining a going-concern in accountancy speak. In this regard economic growth is paramount to instilling confidence. The ability to issue debt without good growth prospects is not a good mix because it increases the perceived risk. It leads holders and buyers of debt to demand higher yields to compensate, in turn pushing up servicing costs which then present a real challenge; a death spiral.

Currently there is room for optimism. As chart 2.0 demonstrates, in developed markets debt servicing costs are extremely low allowing governments to borrow at next to nothing. This will buy time as recovery builds and with the stimulus packages unleashed economic growth rates will begin to accelerate. Yes, we must be aware of the ongoing risks posed by this virus, but we are in a different space now in terms of our knowledge and understanding of the virus and in our ability to react to new cases as they are detected. One thing we can bank on is that any rise in new cases will be hyped up by the media and scepticism will prevail. 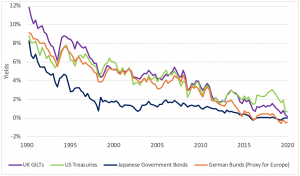 What options will governments face going forward to service and reduce debt?

Typically, treasury departments have a handful of responses to consider:

Austerity measures are likely to prove unpopular and will hold back growth. Raising tax rates too early will stymie recovery and will certainly not appeal to the target electorate for President Trump in advance of the November elections. Issuing government bonds will in the short-term plug some of the gaps from debts due to mature, and Central Banks are happy to step in as buyers of last resort. Inflation over time helps because it suppresses real debt levels. However, too much too soon will be unwelcome. That said there is a strong sense that inflation, if it occurs, will be allowed to run hot with Central Banks using yield curve control to ensure borrowing costs remain low.